This fall I declared my intentions to overwinter my outdoor potted plants, mostly geraniums, without cluttering up my house (not the ideal place for plants such as these, anyway), so I set out make a “redneck” greenhouse. I have a roofed deck on the west side of the house, one side of which gets nice south sun on winter afternoons, so I planned an attempt to close in a small area under this roof to keep my posies from getting frost-nipped during winter. Working with a small budget I purchased a poly tarp and a few plastic drop-cloths, then poked around and found some scrap lumber at home.  I had made good progress over several days in assembling these materials around some stainless work tables I’d acquired inexpensively a couple years before, using a staple gun to attach tarp and drop-cloths to the rafters and the decking, leaving insulating spaces between the inner and outer walls of plastic.

Riley, my 80 pound ‘love-sponge’ Boxer-mix canine, was loafing inside the house on the couch on this sunny Fall day.  I was puttering around the project area making adjustments and revisions, nearly ready to bring the plants inside my new creation when I heard, quite nearby, the raspy meow of a kitty-cat.  Since I’m a big softy for a lost animal I looked around to locate the cat (which is an interesting process for me, with one deaf ear – I can’t tell where a sound is coming from at all!!! I look ridiculous, assuredly, swinging my head into varying positions and trying to tell “is the sound louder with my good ear here… or here… or maybe here… hmmm, maybe if I step this way…”). So, anyway, I was a bit concerned for the cat because there are many dogs in the yards around me and also a fairly busy residential access road right outside my back gate. After some seconds of head wagging and odd-ball movements, I determined that the sound seemed to be coming from just outside the yard, near the road.

I stepped out the back gate, calling, ‘Kitty-kitty.”  The meowing was definitely louder, but I didn’t see the creature immediately.  Then, a beautiful white cat tiptoed out from behind a shrub, in that quick walk/half trot that cats with intentions employ.  She headed straight toward me, meowing plaintively, as if to say, “Oh, there you are! I’ve been looking for you!”  Well, my heart melted! I knelt and held my hand out as she approached with no fear, indeed with such eagerness that an observer would’ve thought we were previously acquainted; she rubbed her head against my hands, then allowed me to lift her, purring warmly.  She quickly grew restless in my arms so, putting her back down on the sidewalk, I invited her into the yard where surely she’d be safer than near the road, appreciating that my dog was in the house – he has no love for cats… well, maybe as chew-toys.  She followed me in willingly and unhesitating, accompanying me to the deck where the ‘construction’ was going on and proceeding to make herself right at home – rubbing against my hands as I worked, twining around my ankles, chasing moths in the corners, carefully investigating all dark corners and high spots, a loving purr rumbling if I picked her up to rub her ears. Her dark blue eyes made frequent contact with mine, by her initiation, as she entreated me to give her lavish love and attention. She stayed near me while familiarizing herself with the area in- and outside my makeshift greenhouse on the back deck, ‘talking’ to me frequently, usually seeming to say, “I’d love for you to stroke my beautiful white coat!” which invitation I obliged, often wrapping my arms around her slender body as she sat on the work table in front of me, surprised at the allowance of this enclosing move. I continued to work on my structure as she lolled in the warmth of the sun-warmed space – such a lovely thing it was, to share the warm fall day with so enjoyable a companion.

Feeling more than a bit guilty about the attention I wasn’t giving my resident oh-so-faithful companion, Riley, I went to bring him out, making sure that Kitty was not in immediate sight. When Riley was young, we had a momma cat and her kitten for a short time. I kept them confined to one room for most of the day and let them explore the house  a while each day. Riley would sit on his bed as they sauntered by, shivering and quivering because he had learned early-on that momma was not to be messed with! I think to this day he’d like to get back at ALL cats because of her ‘mistreatment’. So, that in mind, I was careful about his approach to our guest, keeping a finger looped under his collar.  Shortly before Riley came to meet her, she was lying on the work table on her back allowing me to scratch her tummy; when I watchfully let Riley enter the greenhouse area, he immediately saw her and his eyes clamped on to her movements.  She, on the other hand, was oblivious to him, so much so that I had to physically turn her head in his direction as she clambered from one surface to another.  She looked only mildly surprised, or maybe just mildly interested in him as another adoring worshipper, but, regardless, went on with her explorations.  When Riley’s nose (or teeth!) got too close, she half-heartedly batted at him, and though it seemed that she would be willing to engage in play with him, I knew better and I pulled him back.

Wondering if I was on the brink of a new family addition, I eventually escorted Riley out of the greenhouse and sat with him on his bed on the deck and waited for Miss Kitty, as I’d begun to call her – very unoriginal, I know –  to come out, as I knew she would, to see where we were.  She appeared and I let her sashay out of sight around the corner of the greenhouse before I released the again-quivering Riley thinking, silly me, that things would be calmer outside.  He shot after her as fast as his arthritic joints would allow (not fast at all…) there were some scrambling sounds, some huffing and puffing, many leaves were scattered into the air and the cat was gone, under the fence before I could get up (these things take a bit longer these days). Worriedly and a bit regretful, as I had become quite attached in our short acquaintance, I scampered (okay, hobbled) to the back fence to see her skitter off up the sidewalk and slip under another fence, back to her own life again, presumably.  Riley was somewhat triumphant and perhaps a bit frustrated with the outcome.  I was just a little lonely without the presence of the lovely visitor.  I gave Riley a “Good boy,” because he is, after all, and we headed into the house… the sun was lowering in the sky and the day was cooling.

I hope to be blessed with another visit soon, but for now will content myself with the memory of the afternoon visit from my new friend. 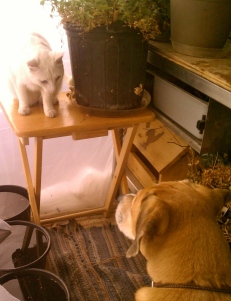 The Stand-off at the Redneck Greenhouse 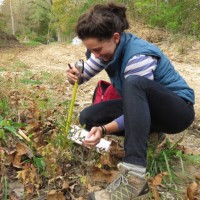 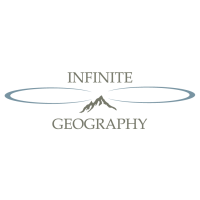 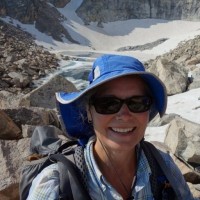 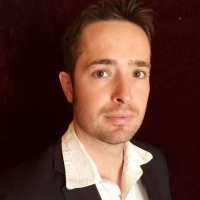 A blog by the creator of the Grand Enchantment Trail

Take the Path of Most Resistance

More to See Than a Lifetime Allows

You can Wonder all you want, or Wander and find out...

The Diary of a Moon Child.

And just like the moon, I go through phases.

Stories and Fiber Art from 5,000 Miles of Adventures, by Kris Grenier

Just some joyful jawing about backpacking, hiking and snowshoeing

Tales of Blisters and Bears

life scenes from the tailgate of a rusted-out Chevy

No packaging. Nothing processed. No waste.